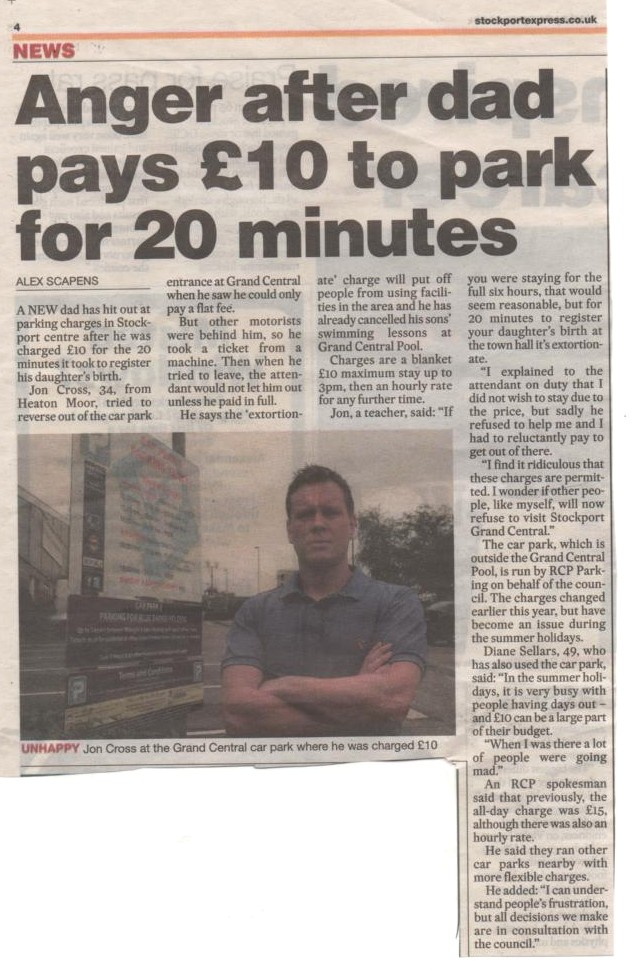 "Grand Central Stockport
From Wikipedia, the free encyclopedia
Grand Central Stockport is a retail, entertainment and leisure complex in Stockport, Greater Manchester. The front half of the development is still open, including the pool and Cineworld cinema, along with some other businesses, the rest of the complex has been torn down! It was located within the boundaries of the town centre and adjacent to the town's railway station.  The complex used to contain a mixture of entertainment, leisure, retail and food venues, complementing the offering in other parts of the town centre. The more notable parts of the complex used to include the Grand Central Pools and Leisure Complex, a  Cineworld Cinema and a Tenpin Bowling and Quasar. The pool and cinema remain open while the current redevelopment takes place. It was owned by Norwich  based private property company Targetfollow, who acquired the complex for £10.8m in 2004. In January 2011, after lack of progress on the development scheme, Stockport Council purchased the complex. In December 2011, Stockport Council announced that Muse Developments, the urban regeneration division of construction group  Morgan Sindall had been selected as the preferred developer with a report to be presented to the council the following week. The revamped regeneration plans include an office quarter for the town centre, a hotel, public space outside the railway station. In addition the redevelopment would also include a multi storey car park and to make the site into a more attractive gateway into the town centre. The new redevelopment plans are valued at approximately £145m
Facilities
The Grand Central Pools have the only  50m swimming pool in Stockport. and are operated by Life Leisure (trading name of Stockport Sports Trust) on behalf of Stockport Council. Life Leisure took over the running of the pool from Serco Leisure in October 2011. In 2008 the pool was named as a British Swimming Intensive Training Centre, one of only five across the United Kingdom. They may be used by visiting Olympic nations as a training base before 2012. In addition the Stockport Metro Swimming Club are based at the pool. Former facilities include a Club Heaven and Hell nightclub, which closed in 2006 after the chain went into administration and the premises were reclaimed by Targetfollow.
The centre contains three separate car parks, all containing different tariffs. Some are in place to provide extra parking for rail users, with all day and longer stay tariffs, however the majority of space is for those using the complex
Redevelopment
It was announced in February 2007 that the complex was to be redeveloped by then owners Targetfollow, at an estimated cost of £100 million.The development was to have been completed by 2010. The proposals were designed as a part of Stockport Council's Future Stockport masterplan. The redevelopment plans have been put on hold following the financial crisis, as of 2010 development has not commenced. The redevelopment plans include construction of a multi-storey car park, adding of a more significant retail element to the complex and a  Travelodge hotel In total the redevelopment will add 400,000 sq ft (37,000 m2) to the scheme and nearly triple the car parking spaces to 1,500. It will also include 200 residential apartments and improved Public Spaces.The planning application was submitted in July 2007.The planning application was successful and outline planning permission for the entire scheme was granted.
In July 2010 the then owners of the complex, Targetfollow narrowly avoided going into administration, after loans exceeding £200m provided by Lloyds Banking Group  expired. In total the companies debt in July 2010 was estimated at around £700m.
In January 2011, Stockport Metropolitan Borough Council purchased the complex, citing lack of progress on the redevelopment scheme. It is likely that under local authority ownership the redevelopment scheme will go ahead. In December 2011, Muse Developments were selected as the preferred developers for a revamped £145m scheme containing an office quarter, hotel, larger car park and more public space, and with the exception of the swimming pool and cinema, demolition of the other buildings, including where the nightclubs formerly stood, took place in the spring of 2012 as part of the future plans for the complex."

I have recently seen references to "Prudential Borrowing." As a council taxpayer (to SMBC) I take an interest in all aspects of the Authority's affairs; while my particular area of experience and expertise is not finance, I nevertheless feel that I can now relate my monthly council tax bill to monetary matters at SMBC, even if they are on a grand scale.
I assume that "Prudential Borrowing" does not refer to a specific source of finance but to borrowing (from whatever the source) by local authorities for which certain criteria set out in a code intended for the guidance of financial officers and the Authority generally on areas of capital expenditure. There are certain areas which are not entirely clear to me and they are these -

1) The amount of debt etc most authorities can incur is no longer capped - instead they should conform to the Code to show affordability and prudence.

2) The Council does not take out specific loans or mortgages on schemes financed by Prudential Borrowing - it is treated as part of the general cash flow and pooled with other requirements and managed centrally by SMBC's Treasury Management Service.

Minus £17 million!! And they are based in Norfolk just like NPS.

As with so much that is going on with SMBC, I am scared that this is all being messed up as at SK Solutions:-

Could you please let me have access to a copy of the CIPFA Code so I can ensure that this has been complied with, as purchasing one would be beyond my budget and a bit beyond my needs as to warrant a place on my bookshelf. I hope the purchase of these two sites meets the criteria set down in the CIPFA code.

Please also let me know who owned the Debenhams site.

Both the development of Grand Central and the acquisition of the Debenhams lease were authorised by the Executive. Herewith are the links to the publicly available reports and minutes for the relevant meetings:
Grand Central Development – Executive Meeting on 16 Dec 2011:
http://democracy.stockport.gov.uk/ieListDocuments.aspx?CId=117&MId=289&Ver=4
http://democracy.stockport.gov.uk/documents/g289/Printed%20minutes,%2016th-Dec-2011%2018.00,%20Executive.pdf?T=1
Debenhams Lease – Executive Meeting on 6 Feb 2012:
http://democracy.stockport.gov.uk/ieListDocuments.aspx?CId=117&MId=291&Ver=4
http://democracy.stockport.gov.uk/documents/g291/Printed%20minutes,%2006th-Feb-2012%2018.00,%20Executive.pdf?T=1
The acquisition of both the Grand Central and the Debenhams sites were financed by Prudential Borrowing. The Council does not take out specific loans or indeed mortgages in relation to schemes financed by Prudential Borrowing. Prudential Borrowing forms part of the Council’s overall cash flow and borrowing requirement and these requirements are pooled together and managed centrally by the Council’s Treasury Management Service. Treasury Management activities are conducted in accordance with the Council’s Treasury Management Strategy approved by the Council Meeting in February each year. The Executive receives regular updates during the year on treasury activity and the Council’s Treasury Management Annual Outturn Report for 2011/12 will be tabled at Executive on 20th August 2012 and Council on 27th September 2012 and will provide detailed information on treasury activity in 2011/12.
The reports for the Executive on the 20 th August 2012 will be available on line using the following link:
http://democracy.stockport.gov.uk/ieListDocuments.aspx?CId=117&MId=4865&Ver=4

This purchase of the land is being paid for by Prudential Borrowing. There is no top limit - however, I hope the actual amount at any time should be made known - What its actual use has been and if possible the interest rate, how long is the arrangement to last?

There is a Code of Conduct which governs Prudential Borrowing - I shall ask the Council for details (no doubt being labelled "vexatious" for doing so.

The arrangemets with Prudential Borrowing - no structure, limits but seems to operate like a bank account but mingled with the  other cash flows of SMBC and managed (?) by financial in-house personnel.

There is no earmarking of projects for the funds it seems. What is the deal - interest, ending/revision of conditions - a bit unusual.  No specific loans, mortgages.

Prudential Borrowing - deals with uncapped, capital spending - like honey to a bear (no offence meant to bears).  This appears to be open-ended in that no mortgages or security of any kind seems to be involved.  It seems open house in that the borrowing is effectively guaranteed for the lenders by the council taxpayers.  A crumb of comfort  - it (the arrangement) is being managed by in-house financial manager at the Town Hall - 'nuff said!

The Council should abide by the CIPFA Code for Capital Finance.

Grand Central and Debenhams lease - many years costing the taxpayers of SMBC a great deal of money with apparently no progress of any kind (not even a settled basis for working is established as yet).